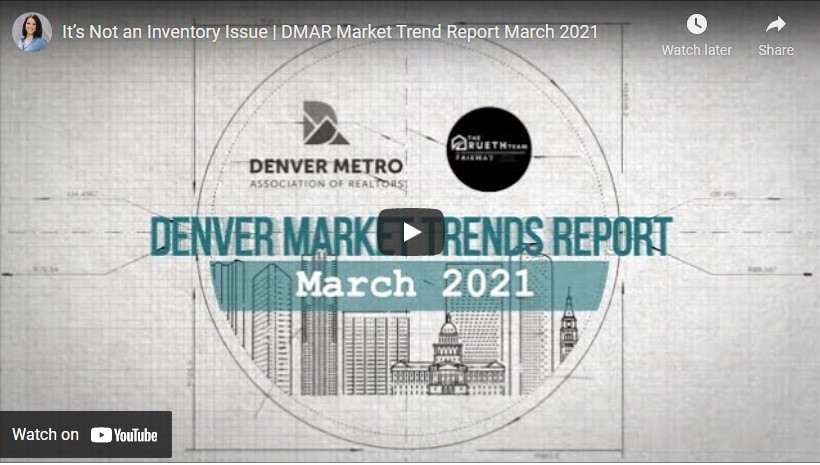 It’s Not an Inventory Issue

February was a sea change that highlighted an anxious economy ready to embrace herd immunity and start a new version of normal. The House of Representatives passed the $1.9 trillion stimulus bill without a single Republican vote. The Johnson & Johnson single-dose vaccine received an emergency FDA approval with only 66 percent efficacy. The ten-year United States Treasury broke 1.50 (the last time it did that was one year ago when rates were 3.49 percent). As we work through this transformation and American’s find other things to spend their money on, other than houses and cars, we will start to see how much of this housing inventory strain was caused by lack of supply or over-exuberant buyers.

Mortgage rates were never supposed to be as low as we saw over the past year. Yet, 12 million homeowners were able to take advantage of securing the lowest rates history has ever seen because of a sick economy and the Fed stepping in with dramatic quantitative easing, driving rates incredibly low. These low rates were great for mortgages but unsustainable. As the economy gains strength, the Fed won’t need to intervene, and rates will rise to more normalized levels – 3’s in 2021 and 4’s in 2022.

During February, the Empire State Manufacturing Index came in two times higher than expected. The Producer Price Index (which shows wholesale prices) showed up three times higher, signifying an increase in costs-of-goods and impending inflation. Retail sales were expected to show an increase of 1.2 percent. Instead, it came in for the month up 5.3 percent, demonstrating American’s thirst to spend and their demand on supply. Personal income also saw its biggest monthly gain jumping 10 percent, with yet another stimulus check on its way.

Tight inventory continues to be the agony of every buyer and buyer’s agent, especially those trying to get under contract with VA, FHA, or down payment assistance loans. Some of these pressures were underway long before Covid while they ignited others.

But this isn’t the whole story. Interestingly, there is enough inventory to break records on sales. 62,985 homes in DMAR’s 11 county area sold in 2020, for a record-breaking year, and another 3,641 sold in February, up 13.43 percent month-over-month and 3.70 percent year-over-year. It’s a Days-on-Market issue, not solely an inventory one. Homes are coming on and selling faster than you can sell chips at an edibles convention.

Median Days in the MLS dropped another 66.67 percent to a speedy five days, and Months of Inventory stayed rooted under two weeks’ worth. Close to List didn’t surprise anyone coming in at 102.54 percent for single-family homes but did show attached are finding their way back into favor at 100.66 percent. Prices overall were the headliner as DMAR’s Median Price was up another 4.40 percent month-over-month and 18.75 percent year-over-year in February. CoreLogic echoed Denver’s price exuberance with their appreciation recording a strong 9.2 percent growth, showing sellers just how much homebuyers are willing to pay for their chance.

Buyers, don’t give up yet! Patience is a virtue, and your time is coming. Yes, there are more of you than ever before, but we expect homeownership rates to drop and interest rates to rise. If this happens, the frantic buyer will trade in their Sunday house shopping for baseball and Disney tickets. Rates will temper the recreational buyer who’s thinking about moving up because, with 87 percent of homes below 80 percent loan-to-value, there’s a lot of equity chilling at a low rate. Those folks will stay put with a rate lock.

Having a partner, you know, like, and trust, has never been more important. Today’s housing market is challenging as we navigate 2.7 million fewer homes for sale than in 2007 with 8 million more households. Even with increasing rates, investing in a home will still be one of the greatest financial decisions you will ever make.