Did Rates Go Up or Down 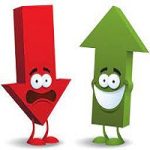 Did Rates Go Up Or Down?

I had a Realtor tell me yesterday that rates hit another high.. meanwhile I was saying they came down slightly.  News is confusing.  Most reporters grab the Freddie Mac rate report which comes out every Thursday.  That Freddie Mac report assumes a .8% rate buy down and is almost a week old in data.  The Mortgage News Daily tracks a pool of lenders every day.

Economists are also so confused.  Atlanta Fed President, Bostic, indicated yesterday he would likely not support a potential 100bps Fed Rate hike.  Yet, his Atlanta GDP Tracker dropped from negative 1.2% to negative 1.5%, showing a deeper GDP loss expected for Q2.

What else happened this week impacting your buyers appetite to buy?

It was a week full of economic news with the stock market finishing sharply higher Friday on stronger than expected retail sales data and a moderation in inflation.  Commodities are dropping… slightly, so some are saying future inflation readings could come in lower.  Others disagree.  CPI surprised the market again with a higher reading of 9.1%, the highest since 2005.  Last month when the CPI came out higher than expected, the bond market reacted quickly and negatively with rates jumping .75% in two days. This time the opposite happened.  Why?  Because the market quickly ramped up bets for a 1.0% Fed Rate hike at July’s meeting.  I highlighted the one day change in the Fed Rate Expectations for both July and September in Thursday’s Market Update.  In the Long term this swift action to control inflation will push us into a recession and force lower rates.  Longer term bonds eased which the 2yr treasury saw prices drop and rates rise putting an even bigger spread in the 2 and 10 yr treasury yields

With the market almost celebrating a recession and the slowdown of economic growth; we will continue to see rates move within a tight range as bonds are stuck between 2.56% and 3.17%  This range has been tested several times over the last several weeks and bonds are finding it harder and harder to move outside the range.

Jobless claims came out 9,000 more than last week after a flat unemployment reading the week before.  There are still 11.2M jobs available and $2T in savings.  American’s are stronger going into this recession than they were in 2020 and 2008.

So what do I say to potential home buyers worried to buy right now (waiting for lower rates/prices) or financial planners telling their clients to not invest in real estate right now due to risk… yes that really happened.  Please ask them how their stock portfolio is doing 😉

This market is completely different from 2005-2008, based on how strong buyers are today and how much equity has been preserved.  Of the 62% mortgaged homes, 75% are locked at/below 4%, with an average LTV of 42%.  The average Colorado buyer today has a credit score of 733 and 24% down.  For a bubble to burst there has to be forced selling of homes.  With foreclosures at 0.1% in Colorado and 0.3% nationwide, homeowners will just sell at market.

Some homes will lose value.. I can’t debate that.  It will be home or neighborhood specific.  Other homes “seem” to be losing value but that’s only compared to the home that sold over list last month or 2-3 months ago.  If you compare those same homes to last year, those sellers are still in the win column. If a buyer is going to be in the home only for a year, the market is moving.  But any longer… appreciation always holds steady or improves in recessions (except for 2 recessions since 1960) and principle reduction is a forced savings plan.  Plus rents are continuing to go up. Investor purchases are still strong (having over 20% market share in 1Q22) .. so.. investment purchases prices will force higher rental rates… at least until there is a saturation of rentals.

Plus I keep coming back to the fact that rates go down during recessions.  If that happens again, we will see buyers come out of the woodwork, buying on the dip forcing home values up. First time homebuyers waiting could find themselves right back into a multiple bid situation!

Redfin released an activity report comparing 400 metros (of which Denver is one of them) covering the four weeks leading up to July 4th holiday. This results reflects the market is slowing down and returning to balance.  While I agree, I am also reminded per DMAR, we still don’t have as much inventory as 2020 or 2019, have only 1.1 months of inventory, and 4 days on the MLS.

Now just imagine how hot home prices would be if mortgage rates didn’t rise past 6% this year and we didn’t take the big hit to affordability?