Jobs Reports Released. Is this a Recession? 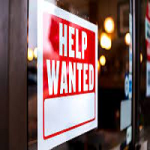 We Can’t Have a Recession With Strong Jobs

Job numbers came out yesterday.  This whole moving the Market Updates to Thursdays is messing me up. 😉 Many Fridays bring an economic update that shakes the market which I want you to know about.  Okay, I’ll get over it.  But Friday’s data moved the market again!  We saw national rates go up from 5.75% to 5.875%.  Why?  The Jobs Report.

Job numbers were expected to come out at 250,000; but instead the number was 372,000 jobs created in June.  Although consumer spending was half what was expected last week, it was still positive, now jobs came out much stronger than expected.  There has never been a recession with strong job growth and positive consumer spending.. so we can’t be in a recession, right?  Historically, when unemployment ticks up, it’s the starting gun for recession’s leg of an economic relay.

So jobs came out showing 372,000 new jobs created… but that’s the establishment survey by the BLS.  It’s the Household Survey that determines unemployment.

The Household Survey is conducted by the U.S. Census Bureau, which calls 60,000 households during the week of the 12th of each month as part of its Current Population Survey (CPS). In addition to determining the employment status of the individuals in each surveyed household, which it classifies as employed, unemployed or not in the civilian labor force, the Census collects data on their demographic profiles, including race, Hispanic origin, age, sex, et cetera.

Let’s go back to the Establishment Survey which is collected by the U.S. Bureau of Labor Statistics (BLS).  This report incorporates the payroll records of some 144,000 non-farm establishments and government agencies, covering workers at some 554,000 individual worksites. In addition to determining the number of people employed at the surveyed locations as of the payroll period including the 12th of each month, the BLS collects data on the number of hours worked, earnings and the industries in which individuals are employed at the surveyed organizations.

This report not only showed an incredibly strong number of jobs created but also provided wage information.  Average hourly earnings were up 0.3% in June and up 5.1% year over year.  If you remove the bottom quartile, earnings are up closer to 8% year over year.  These are the homebuyers.  They are getting jobs and making more money.

Atlanta Fed President, Raphael Bostic, reiterated after the jobs report on Friday that the economy is strong enough to sustain raising the Fed Rate 0.75% at the Fed July meeting as well as step up talks on quantitative tightening.   Controlling inflation and slowing down the economy by raising the Fed Rate could drop our mortgage rates.  Similar to when the PCE core number came out lower last week.. our rates dropped from 5.875% to 5.375% for a hot minute. However, strong manufacturing numbers and strong jobs report pushed rates back up this week.  Strong economies have higher rates.  Weak economies have lower rates. 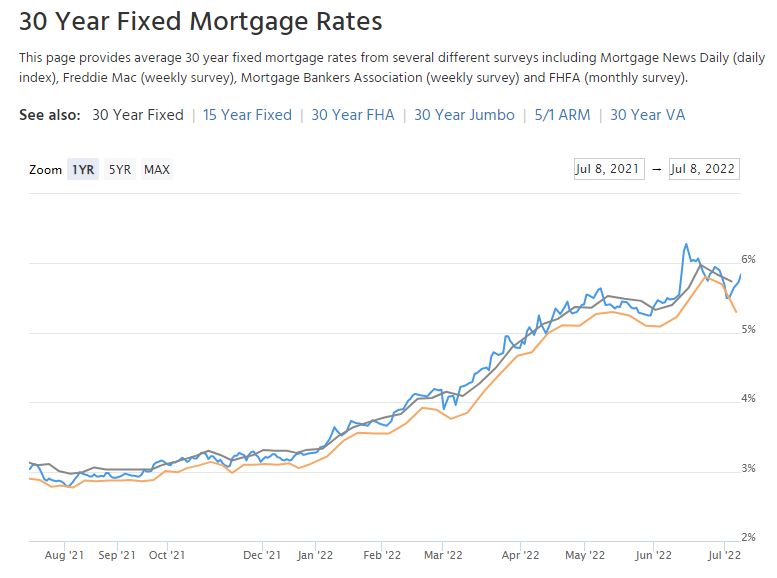 Two job reports, same day… BLS and Census Bureau, one  positive 372k and the other a negative 315k.  Reminds me of the PCE’s big difference from the CPI inflation reports.  Today’s data can be confusing because the market is confused.  Monetary policy flooded the market to help alleviate a world wide pandemic and shutdown.  American’s did what Americans do.. we spent it.  Now do we have too much?  Supply chains are backed up on cars but stocked up on TVs. Ukraine, Russia, and China are still major factors in our economic recovery.  The world is unsettled.

But I keep coming back to housing.  Yes, values might drop.  Not nationally, like a bubble popping, but some streets, neighborhoods, and metros went too far.  Buyers have become discerning and sellers wondering what happened.  In a market like this, the roof over your head is your best investment.  It protects and provides, and even if values go down, they come back up, because real estate always goes up.

This is the time to educate more than ever!  Buyers are scarred with rates going up.  But first time home buyers couldn’t get in.  Now they can. And interestingly if you don’t have to pay over asking for a home, you might end up paying less on a monthly basis for that home even with a higher rate.. watch for this Wednesday’s video.