Recession and Stagflation Are Good For Housing

What Do The Uber Wealthy Know That You Need To Know?

Bidding ensued for a one of a kind at Christie’s Rockefeller Center sales room in Manhattan on Monday.  Andy Warhol’s silk screen of Marilyn’s face went for $195 million, the highest ever paid for an American work of art.  This week’s auto auction also made record sales with a 1955 Mercedes purchased for $143 million, making it the most expensive car ever sold.

What do they know?  The Uber Wealthy are putting their money in inflationary hedge assets.

I am reading articles that inflation is slowing, and this high inflation has peaked.  Inflation is a relative number, compared to numbers last month and last year.  Looking back at last summer the cost of everything was getting higher … so comparing high numbers to high numbers will seem less high.  Year over year inflation should go down.  But does that mean your gallon of gas or milk will cost less?  Not yet.  There are permanent factors to inflation, like wages and housing.  Wages at the manufacturing plants, trucking and shipping, and small businesses all increasing the cost of goods and services.  Wages that will not be given back.

We also have years of unwinding the supply constraints felt by the Russia-Ukraine conflict and China’s shutdown.  Even Powell threw his hands up this week stating a soft landing is no longer in his control due to the huge geopolitical events going on around the world.  We are a global economy.  Inflation will not flatten overnight.

Producers Price Index (PPI) came out this week at 11% coming off a peak but still painfully high when you realize these wholesale prices will ripple down to the consumer.  Cass Freight Rates (shipping) came out up 31.3%. And CPI is still 8.3%.  Yikes!  Personal Consumption Expenditure (PCE) comes out this next week.  Everyone is expecting it to be higher…but the real question is…how much higher?

What if this high inflation can not be controlled quickly?

We’ve been talking about the Fed pushing us into a recession.. two consecutive quarters of GDP decline.  What if they push us into a Stagflation instead?

What Happens to Housing in a Stagflation?

Stagflation is when the economy softens AND inflation continues to be high.  Powell was hoping for a quick recession.. and that still might be what we get.  A quick slowdown of our incessant consumer demand allowing supply to catch up and prices to normalize.  Given how strong and liquid our economy is, an upcoming recession would be quick.  But if he can’t get prices to drop by raising the Fed Rate and quantitative tightening; then high prices will push us into a stagflation.Let’s look at where this progression lands for housing…Economy

A Painting or a House?
I don’t know about you.  But I do not have $195 million or even $143 million. But I am as smart and know when to take the cues from the uber wealthy.  Long term, in any market, housing creates wealth.  In a market where rents are increasing double digits and the cost of everything else is keeping Personal Savings Rate low (only 6.2%); I want something with less volatility and more stability.  People can not save fast enough for a market like this and home prices will continue to go up.. whether it’s a recession we are headed for or stagflation.  Are you helping your clients realize that waiting only keeps them from hedging against what’s coming.  This is not a “sky is falling” conversation but an opportunity in the making.And this is how passionate I am about making this happen!  Do you want to create your own program?  Something you can give your buyers to help them get motivated, to take advantage of this small lift in inventory, slow down of buyers and opportunity to get into a house at list (or even under).  Let’s do it!  I’m in!  Like really in!

What do your clients need?  I’m willing to give up some of my commission if you are.  Let’s get all the first time home buyers back out there.  They don’t know the market quieted.  It’s our job to tell them!!

Rates Going Into The Weekend….
The Dow Jones hit a 52-week low this week slipping into bear market territory.  Much of the decline in investor confidence recently stems from lackluster retail earnings, which has raised fears that a consumer-led downturn is approaching, on top of the inflation and supply chain challenges that have weighed on sentiment for weeks. But some potential silver linings can be found, if one squints hard enough, including a decline in U.S. bond yields… and mortgage rates.  Rates didn’t dip significantly but every little bit counts in a market like this. 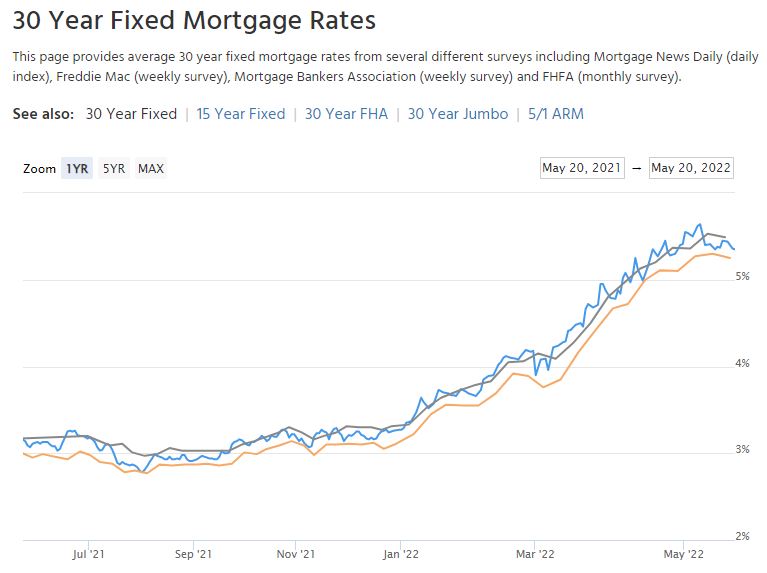