Unemployment Rate Dropped and Bonds Did NOT like it

Unemployment Rate Dropped Significantly…and Bonds Did NOT Like It!!

Walking into this month’s jobs report, estimates were calling for 870,000 jobs to be created. After the 850,000 jobs last month, this was not a stretch.  However,  the number we got was 943,000 PLUS another 119,000 revised jobs added to May and June.  This was the biggest jump since last August when we had just over a million jobs created.  But what really moved the market was the Household Survey.  Remember, there are two surveys.. the Business Survey, which looks at “births” and “deaths” of businesses to determine the job numbers.  Then there is the Household Survey which calls a handful of homes to predict the unemployment number. The Household Survey came in with over a million jobs created.  It was also determined that another 261,000 people came back or into the workforce, raising the US labor force number to 161,347,000.  This is how we get the unemployment number…. dividing the number of unemployed by the current labor force.  So less unemployed or more entering the labor force will push this number down.  It was clear from these numbers that unemployment rate dropped significantly and bonds did not like it.

The opposite will push it back up.  Meaning if more people come back into the workforce “looking for work” our unemployment number could go up again.  There are an estimated 6.5 million people who want a job, but have stopped looking.  If we add them to both the labor force and unemployed, our unemployment number goes up to 9.2%, which is the current BLS U-6 number.

While these numbers are still higher than the pre-pandemic lows of 3.5% unemployment rate and 5.7 million unemployed, they were a welcome sign of a recovering economy to the current administration, to the Fed, and to the stock market.  Several members of the FOMC have been quoted saying they want to see numbers declining for several months before determining if we are seeing persistent improvement in unemployment.. which rules out an announcement of tapering at Jackson Hole meeting later this month. 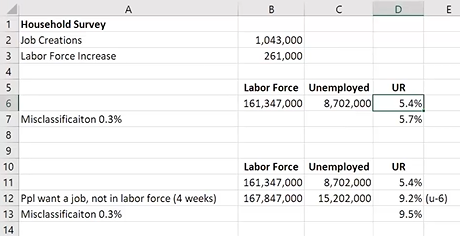 The 10Y UST reacted they way it does when jobs are created, coming off it’s recent lows and back over 1.30 on Friday.  Back in August 2020 when the over a million jobs were created the 10Y started its trek higher… it took until March 2021 though for mortgage rates to follow suit.  So will rates go higher?  They did on Friday.  Continued strong economic reports as kids go back to school and the pandemic unemployment assistance expires, will push rates higher.  Additional variants of the COVID virus and a set back as schools open, could keep rates lower as fall comes in.  The Fed will not likely start tapering until early 2022; so for now, eyes are on the continued strength of the jobs market and filling the 9.2 million job openings.

Renters make up 36% of the 122.8 million households in the United States.  Those renters who were behind were worried about where they were going to live on July 31st.  Three days later, the health agency announced a new ban that will be in effect for 60 days in areas where Covid rates remain high.  80% of the counties around the country are currently on the protected list. Renters lose the protection if their county has 14 consecutive days that fall below those levels. As a Mom, my heart hurts for them.  As a business woman and landlord, I have mixed feelings about this when there are 9.2 million job openings and businesses like Hertz and Shake Shake are offering hiring bonuses.

Ultimately as a teacher, my desire is to support as many renters as I can to own.. because it is the power behind real financial independence.  89.5% of the top 25% income earners own. 93.1% of the top 10% wealthy own.  That is not a coincidence.

Nicole Rueth has been passionately advising clients on their wealth building and home financing strategies for over 17 years. Her path has been non-conventional and it is a benefit to her clients.  www.TheRuethTeam.Com.