Buyer’s Are Frustrated. But, Let’s Consider The Boiling Frog. 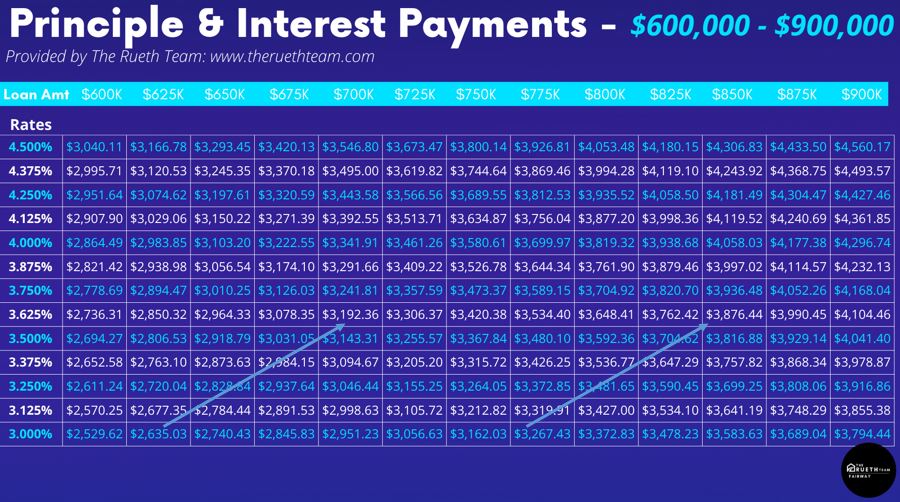 Buyers today are stressed.  House prices are going up.. 19.1% in Denver per CoreLogic (true appreciation).  DMAR’s 11 county median price has gone up 21.05%.  Interest rates are .875% higher than they were a year ago.  This is no joke.  I get it.  I posted three Principle and Interest charts to our Agent Ignite FB Group to help you show the increase in monthly payments incurred as we watch prices and rates go up.

So, If I was a buyer, would I want to throw my hands in the air?

YES!!!  It’s hard out there.  But what is the alternative?   Consider the boiling frog… the premise is that if a frog is put suddenly into boiling water, it will jump out.  However, if the frog is put in tepid water which is then brought to a boil slowly, it will not perceive the danger and will be cooked to death.  Kinda dark, but honest.Invitation Homes put out a report to their shareholders showing incredible strength in raising rents.  Their new lease rate growth was 14.4% in January and 14.5% in February.. these are historically SLOW months for new rental agreements.  Renewal rents were up 9.6% in January and 9.9% in February.  a 10% raise in a $2200 rent is $220 extra a month. 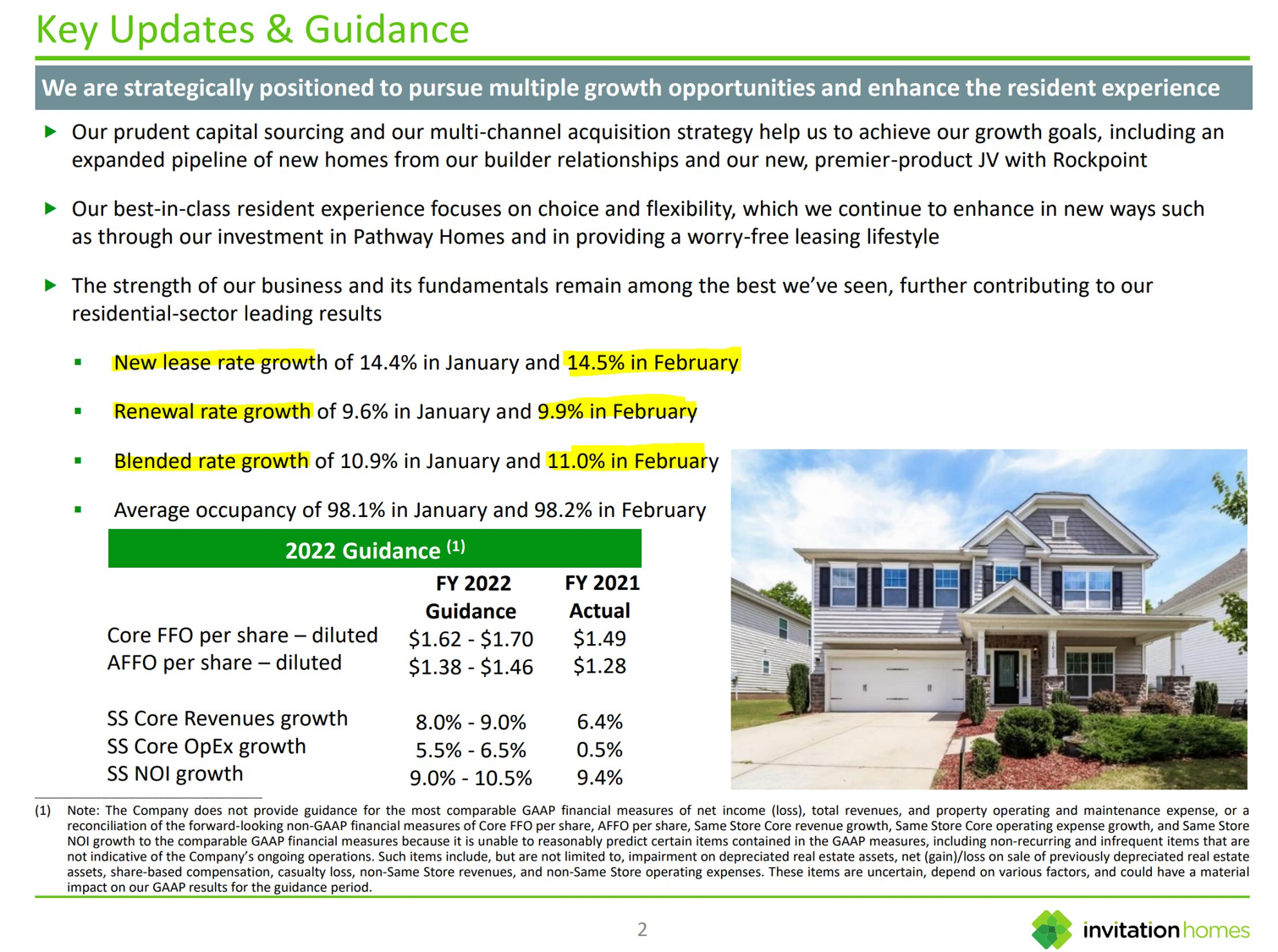 A Bubble is Comin’

As a prospective buyer (i.e. a renter) maybe I can afford $220 more.  I mean really.. while I signed a new 1 year lease, that $525,000 purchase increased to $625,000 and my payment increased by $600 with the rise in interest rates.  You know what… I’ll just stay here pay the $220 more and wait for the bubble to burst.  Because you know it’s comin. You know it is.But is it?  They think it is because 2008 is so close, so painfully remembered.  But while the world seems intense right now, housing is the ONE thing that will give security and stability, especially offsetting the rising inflation.. which came in at 7.9% this week .. and that does not even include the Russia-Ukraine War.So let’s go through that conversation.  The anti-bubble one.

Below is a chart of the S&P Case-Shiller House Price Index… measuring the appreciation of the homes in America over the decades.  The black lines are the recessions.  Notice the slight dip in the 1960s recession, and increases in the 1970s and 1980s.  There was a flattening in the 1990s and an increase in 2000s.  Denver had an 11.2% dip was in 2008.. we also had a 2.6% dip in 2007, 3% dip in 2009 and 1% dip in 2011.  That’s it.  Other metros had more.. but as a whole, the U.S. only saw home prices tragically drop due loose lending creating an overexposed homeowner with a 580 average FICO; no asset, no income and no job; and an 80/20 loan package.  And even better.. they could sign on that homes with no money down then go across the hall at the title company and do it again.So why do home prices go up in recessions?  Great Question!  Recessions are defined by two consecutive quarters of GDP decline.  Think of recessions as an economic reset.  Consumer spending which is 70% of the GDP is hot and cooling if off a little due to a drop in consumer confidence, a loss of jobs or the price of everything being too high.  Consumers slow down, GDP falls, the economy slows, and inflation drops.  Where inflation goes, so goes long term treasuries and mortgage rates.  Mortgage rates drop, people start making choices with their money and buying appreciating, income earning homes.  Home prices go up. 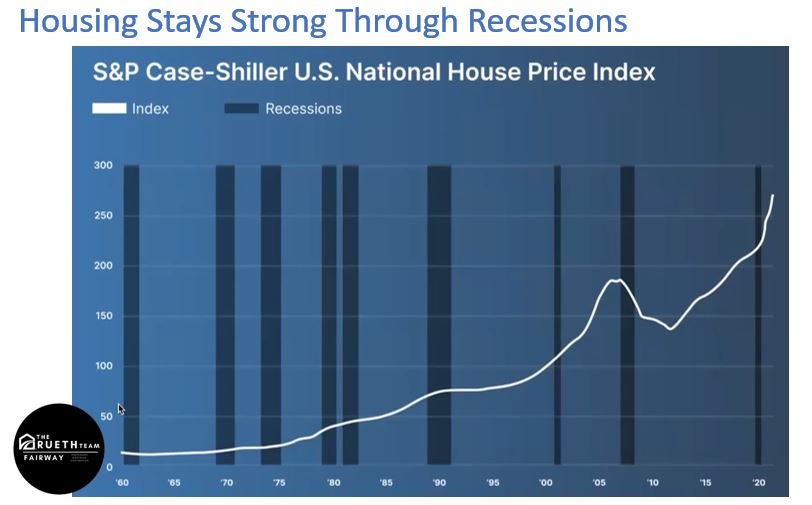 But, This Time There’s A War

Which changes things a little.. as recessions go.  But stays the same for housing.  Here’s why.

We are headed into a Stagflation.  Where inflation will continue to increase… even if the economy slows down.  That’s a problem.  The cost of things will go up, as availability is limited due to wartime constraints.  This war, especially, will change things.  Russia being cut off from SWIFT ( Society for Worldwide Interbank Financial Telecommunications) will force them to build their own banking solution, one that includes China and North Korea.  Raw materials, metals, oil that we rely on might have to come from elsewhere, be sourced and manufactured elsewhere.  This takes time and continues to put upward pressure on things we need for building and remodeling.  Increasing the cost and the price tag of new builds and remodels and .. ultimately housing.

High inflation will continue to put pressure on investors to find asset classes that hedge against inflation.  We saw the price of gold go up with the onset of Russia’s invasion.  Housing also is an incredible hedge against inflation AND a source of continued income. Investors, Millennials, first time homebuyers and move up buyers are all fighting for the same inventory.  We are seeing that play out in the speed of days on market (4) and price over asking (104.75%).  As the price of homes and interest rates continue to go up, some of this demand will bow out.  In 2018 when we saw rates go up to 5%, DMARs 11 county area saw an increase of 1000 homes.  This wasn’t more inventory.. it was simply slower demand.  Those homes sold.  They just took more than 4 days to do so.  Buyers had choices.  Prices did NOT go down. In fact, 2018 saw an increase in median prices of 8.3%, which is considerably higher than Denver’s average of 6%.

Besides strong demand, limited supply, would be buyers waiting for a bubble will also be disappointed due to strong equity positions protecting homes from selling at a discount.

Coloradoan’s saw an average of a $75,000 gain in their equity position last year.  Homes with negative equity dropped 25% to only 1.5% of Denverite’s and 1.6% of Coloradoans being under water.  Only 1.9% of our households are 30 days past due on their mortgage and only 0.2% in foreclosure… this is a 23 year low).

Total household net worth as a percentage of GDP has never been higher rising $150 trillion in the 4th quarter of 2021 alone.  The value of real estate increased $1.5 trillion in the 4th quarter and $3.2 trillion last year.  Today, including the third of all homes that are paid in full, the U.S. has an average household real estate equity of 69.2%.  WOW?  In 2008 the equity percentage was only 46% nationwide.  The bubble is off the table.  A slowdown in appreciation is what homeowners will find as demand slows, showings slow, few offers are had and the price over list calms down. 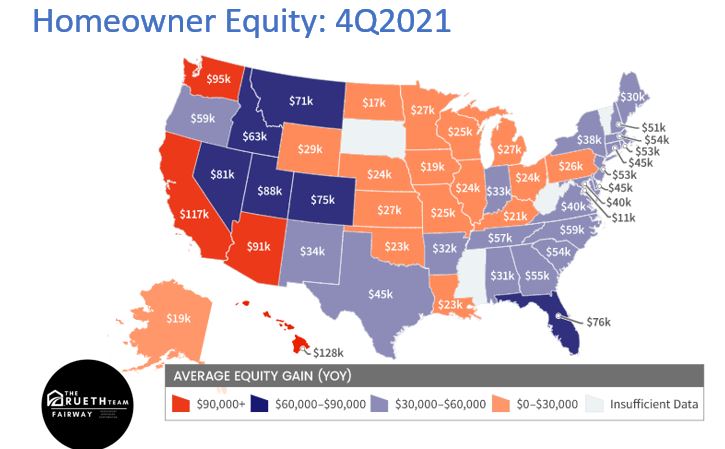 So back to my renter with their $2200 a month in rent that just went up to $2420.  Doesn’t feel so bad compared to that house they had their eye on last year that went up 20%.  But stretch that out a few years as inventory will NOT correct itself quickly.  It will take years to recover from this intense inflation, pandemic induced supply chain constraints doubled down by an untimely war, and incessant demand by both homebuyers and investors.  Years.  So in that time, if that renter sees an increase in rents of 10% then 8% then 6% then 4% then 2% (rents will calm down as rental inventory increases).  That rent will be $2939 in 5 years.  Meanwhile their $625,000 loan has a P&I payment frozen at $2850.  Fixed for 30 years. Plus in 5 years they will have also gained a net wealth of $275,640 from a principle reduction of $64,250 and appreciation of $211,390 at 6% historical average price growth.

So while it might seem safer today to just keep renting, the water will get hotter, rents will continue going up, and home prices will not go down, keeping those those renters stewing instead of building a secure financial future.